I’m standing at a wall of paper, my arm raised and ready to write. The conference room behind me is arranged with ten round tables, eight people huddled around each. The eighty participants have deliberated at their tables for the last half-hour, scribbling down their thoughts and prioritizing.

Now we’re ready for the report out.

“Here’s what our group decided….” A woman at the first table stands up. She takes a deep breath and I know what’s coming next. There is no valve on the faucet of World Café report outs.

Most graphic recorders have been in this situation – capturing a waterfall of overlapping ideas, some of them redundant. As we scramble to keep up, the graphic recording becomes a Jackson Pollack of words scribbled quickly without clear organization or legibility. The fast pace of World Cafés also offers little time for participants to digest what is said or offer additional thoughts.

So how do you integrate graphic facilitation with a World Café? 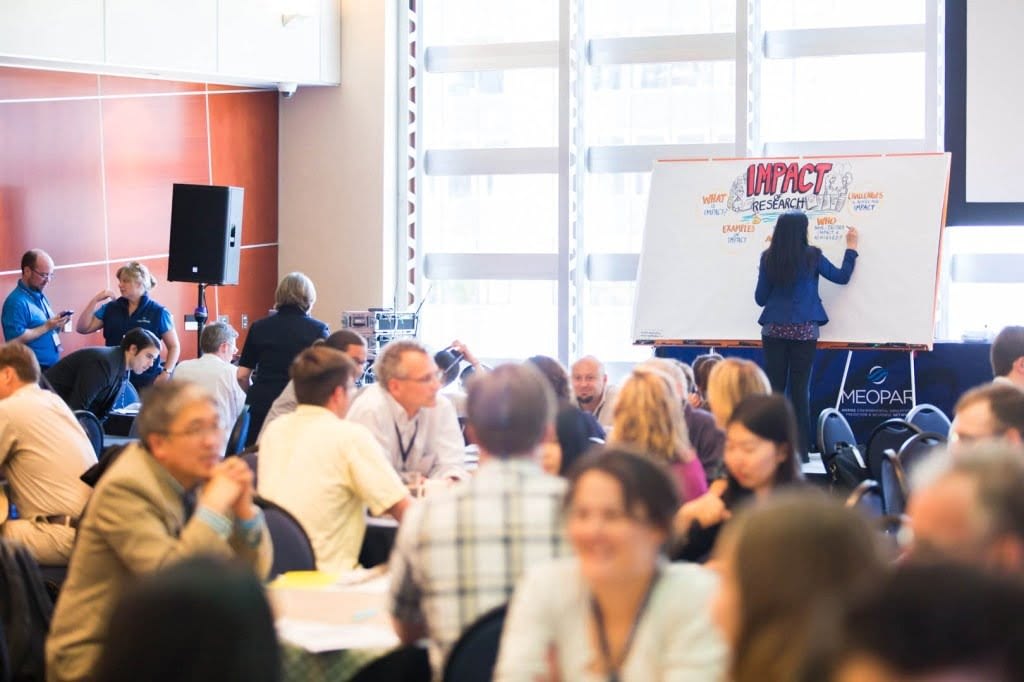 As with any conference or meeting, advance planning is a must to ensure graphic recording or graphic facilitation isn’t just a “fun add-on” but rather an integral part of the meeting discussion and outcomes.

In the weeks or days before a meeting, we discuss the best layout for the graphic recording, appropriate imagery or metaphors, and how best to organize the content.

How much time is planned for each breakout group discussion? How much time for report outs? Who are the participants and what perspectives do they bring? Will participants have the opportunity to interact with the graphic recording?

The most successful World Cafés allow a large group of people to delve deep into a topic and come up with a variety of ideas. But it’s also valuable to take the discussion a step further by having groups prioritize their ideas. What are the top three items they feel need to happen first?

In order to keep each breakout group focused on the goals, provide flip chart paper and assign a recorder to each table. This helps ensure all the details are written down, which are then collected after the report out and can be integrated on the graphic recording.

Or, instead of flip chart paper at each table, consider a visual template to help keep groups on track! 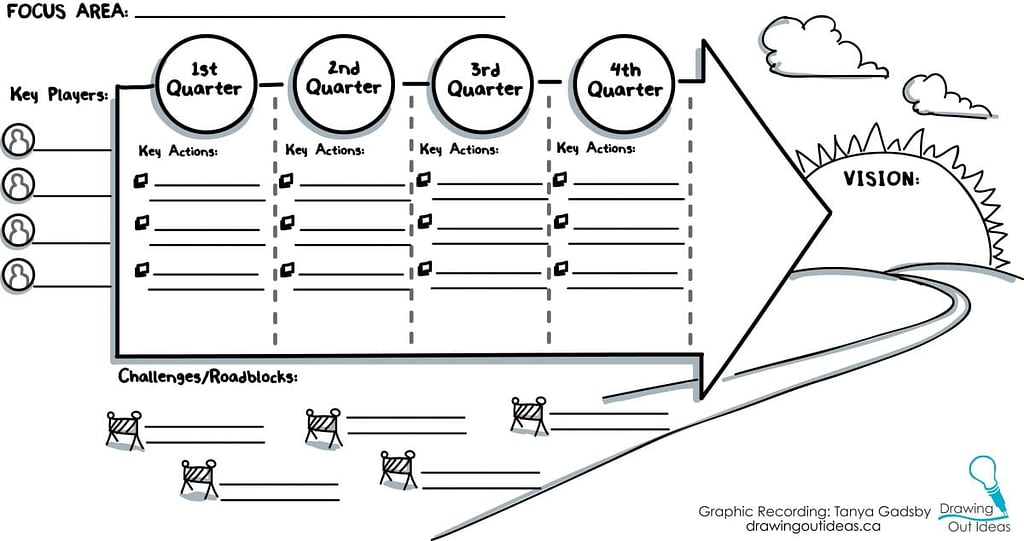 3. Graphic Facilitator Drops In on Groups

Ideally groups are given 3-4 minutes to report out, depending on the density of the content. For example, rather than list every last detail on their flip chart paper, each group reports out their top three ideas and how they came to these. If an idea has already been said in the room, the group can choose to move on to another idea. This ensures we get a high-level capture of the discussions from each table. The flip chart notes from tables are also collected so details and additional ideas aren’t lost.

5. Graphic Recording is Fleshed Out

World Cafés don’t have to be a frenetic confetti of ideas! Graphic facilitation at World Cafés helps organize thoughts into a clear “big picture” and provides an opportunity for participants to reflect and add ideas.